The Halloween countdown is on, only 10 days to go! I’ll admit that I have given no thought to my costume for this year – but my nails are definitely feeling the spooky spirit! This manicure is simple and fun. I’ll include a tutorial and a list of products used so you can give it a try! 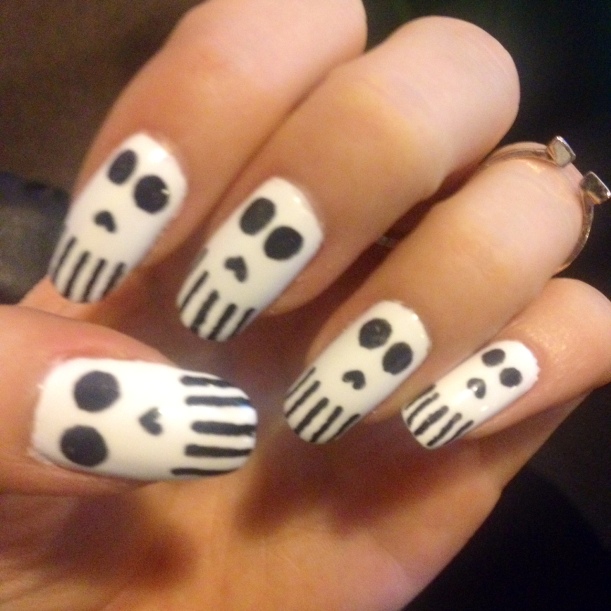 Using essie blanc as a base coat, paint each nail entirely white. Once this base is dry, use a dotting tool (I use this Quo brush and dotting tool set, which can be found at Shoppers Drugmart) to create two black dots for eyes near your cuticle. Next use the smaller end of the tool to create the nose by painting two dots attached to each other. Finally, use the brush to paint five thin lines from just after the middle of your nail all the way to the tip. Allow the black to dry completely before adding a top coat to avoid colour bleeding.

If you’re rocking a fabulous manicure today, send some pictures my way. Tag me in your mani pics on Instagram or Twitter.

Last night I had the pleasure of attending the Rideau Centre Project Preview Reception along with hundreds of other bloggers, media personnel and store owners. The event gave a nod to the mall’s past, present, and most exciting upcoming future. Thirty years after opening it’s doors for the first time, Ottawa’s largest downtown mall is about to get a complete face lift!  Over the next 34 months, huge investments (think double the spend to develop the Ottawa Convention Centre) will be made to turn this already popular shopping center into Ottawa’s go to fashion destination.

Exciting announcements regarding the upcoming Rideau Centre redevelopment – with Ottawa’s majestic Parliament Buildings as the backdrop. 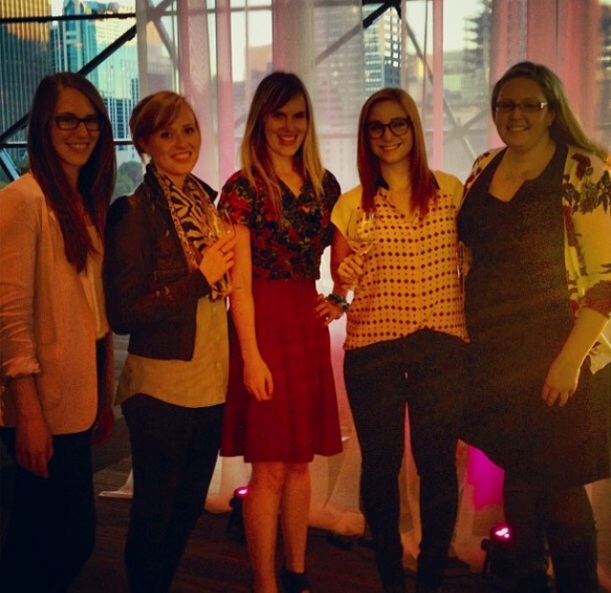 After being wined and dined, Ian Boulva, VP of development at Cadillac Fairview, announced a couple teasers for the crowd, naming a handful of new stores that will be taking up residence at the Rideau Centre: J. Crew, Nordstrom, Victoria’s Secret, Simons, and a flagship Harry Rosen, as well as a new food center which will occupy the first floor space where Sears used to be. On top of a plethora of new brands, Ottawa can expect a four level expansion project where the old Ogilvy building used to be, filled with thirty (or more) stores and a new destination retailer. The redevelopment project will create a revitalized Rideau Centre, with completely renovated interiors, and a more vibrant Rideau Street.

Exact details including, store names and budget will be updated today at the 9:30 AM press conference.

I know, I know, we are still technically five days away from Fall – but the cooler weather has swept the city with a vengeance. I’m okay with this – I am ready to pull out my chunky sweaters and boots and layer until I can’t layer any more.

Do you have any pieces that you are dying to pull out of storage as the seasons change?

After two weeks of black and white manicures, I figured it was time to move onto to something a little more interesting. Using OPI French Quarter For Your Thoughts and You’re Such A Budapest, I created a double accent leopard print mani. 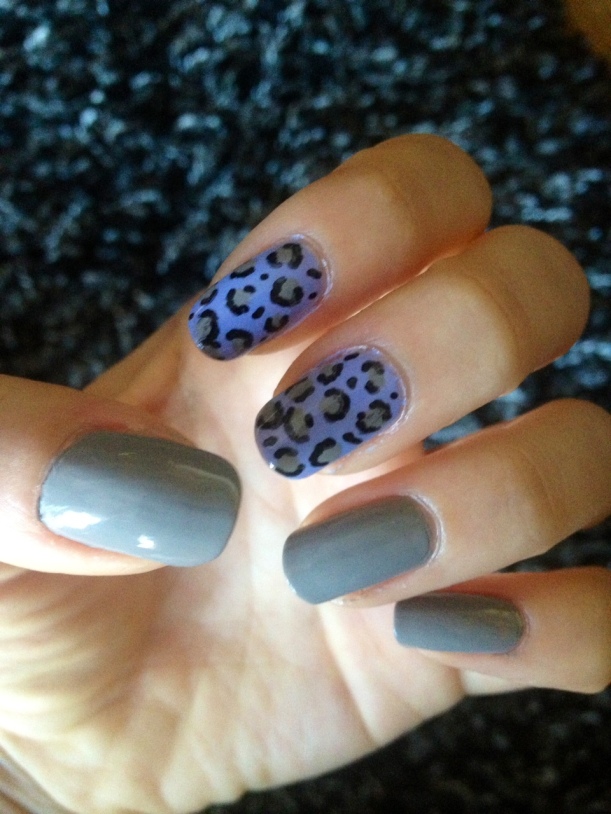 The leopard print design looks intricate and complicated, but it is arguably one of the easiest to complete with just a few pointers. First, paint your nail a solid base colour. Once this is completely dry, paint random, uneven dots all over nail. Using a third colour – I used the Sally Hansen Nail Art Pen, draw “c” and “u” shapes around the dots you painted before. Fill in any blank spaces with dots and lines in the third colour.

If you look closely you can see what I mean!

If you’re rocking a fabulous manicure today, send some pictures my way. Tag me in your mani pics on Instagram or Twitter.

Happy Friday the 13th! Bring on the black cats and broken mirrors… just kidding. What I am not kidding about is how awesome this past week has been. Here’s why:

1. Healthy baking creations that are absolutely delicious! I’ll share this recipe next week.
2. Taking part in the Electro Dash with Sarah of My Mostly Healthy Life. She is such a doll – and funny. I can’t wait until we get to hang out again!
3. Date nights with Neezie in Toronto. Nothing beats a night out with someone you love – and good cocktails.
4. Tacos on lettuce wraps – best dinner ever. Seriously, the best.
5. Dating a genius. As much as I complain about participating in his studies – it is really interesting, and even a little fun – but don’t tell him I said that ;).

Thanks as always to Lauren for hosting this bloggy link up!
Have a wonderful day and a great weekend!

Sometimes an outfit just makes you feel great – this RED Valentino dress does exactly that. It is the little black dress that is work appropriate but still fun and so versatile. It will wear beautifully in the summer with bare legs and through the winter with thick black tights. 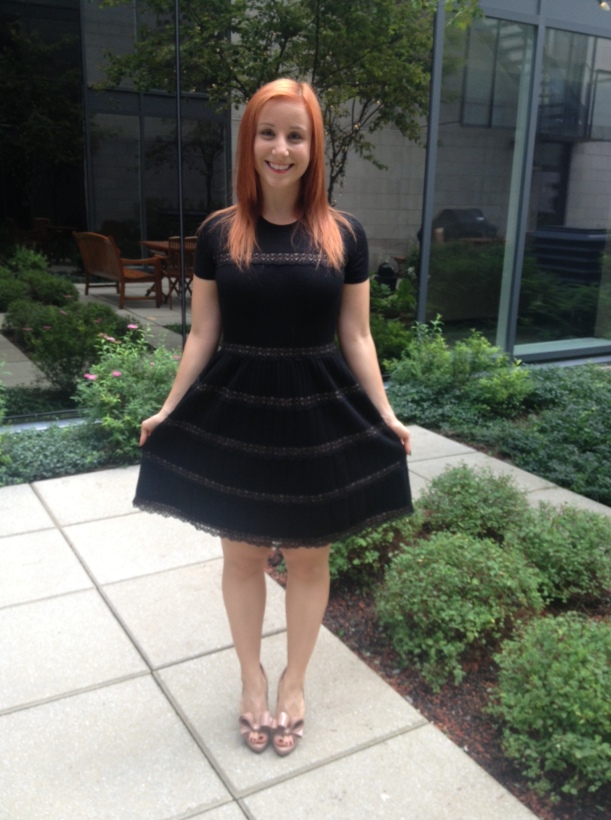 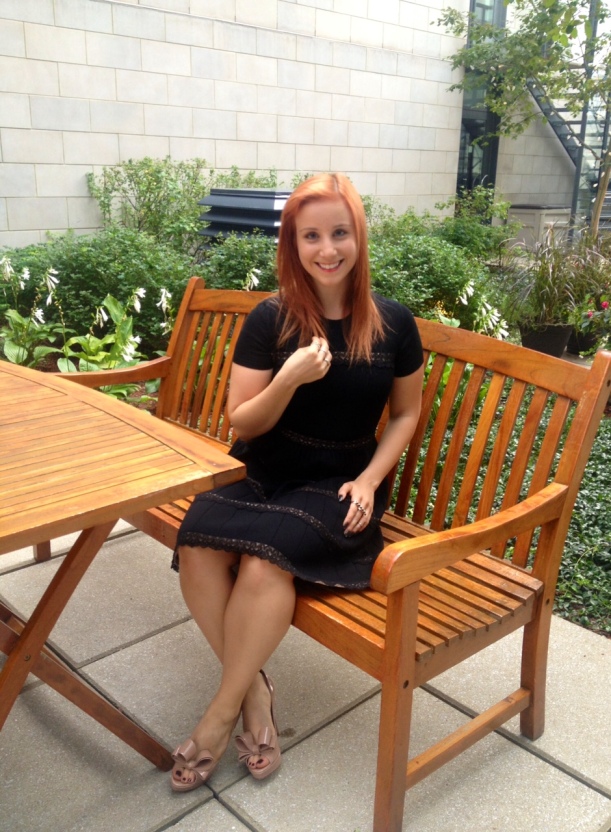 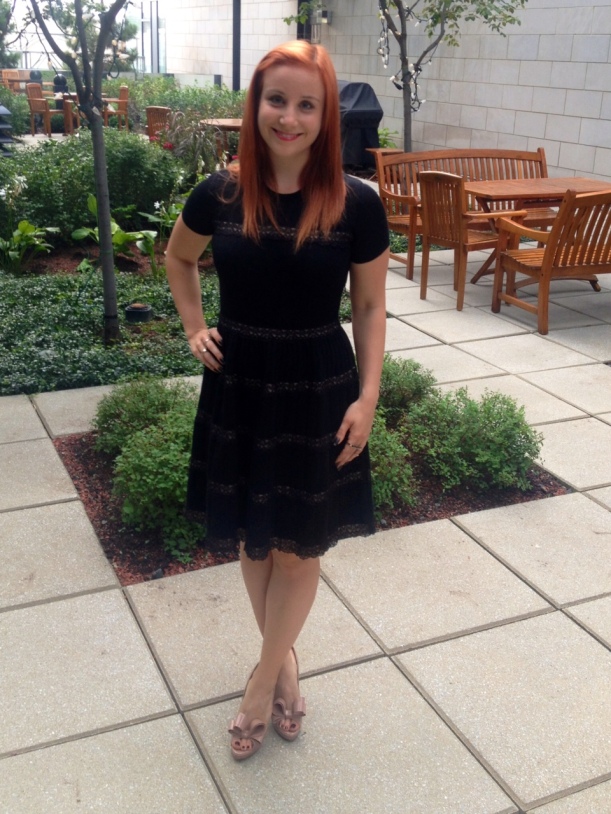 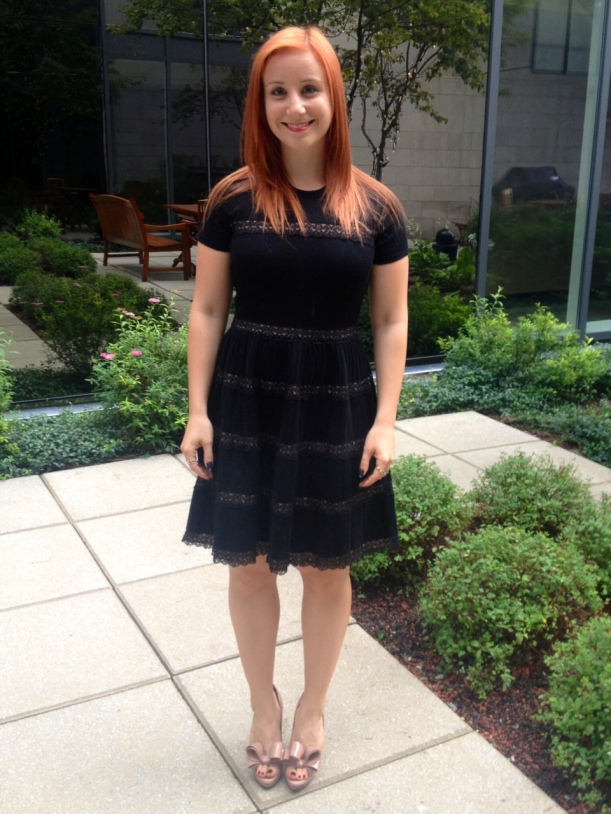 Treat yourself – life is short!

Sticking with the black and white theme this week – this manicure is a cross between elegant and trendy. 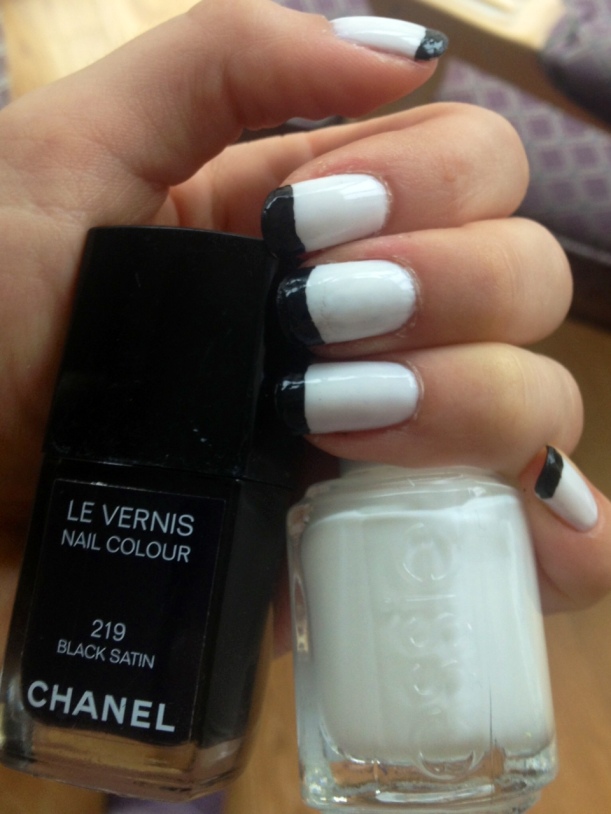 To create this looks, start with a white base, I used essie marshmallow, and then paint the tips with a steady hand using an opaque black.

As always, if you’re wearing a fabulous manicure – send some pictures my way. I’d love to see how your rocking some of the new fall nail trends! Tag me in your mani pics on Instagram or Twitter.

Hi! I'm Lauren. Welcome to a 5'3 Perspective. Here you will find beauty advice, fashion inspiration, recipes and much more. Have fun!